God's service in the outback is never boring 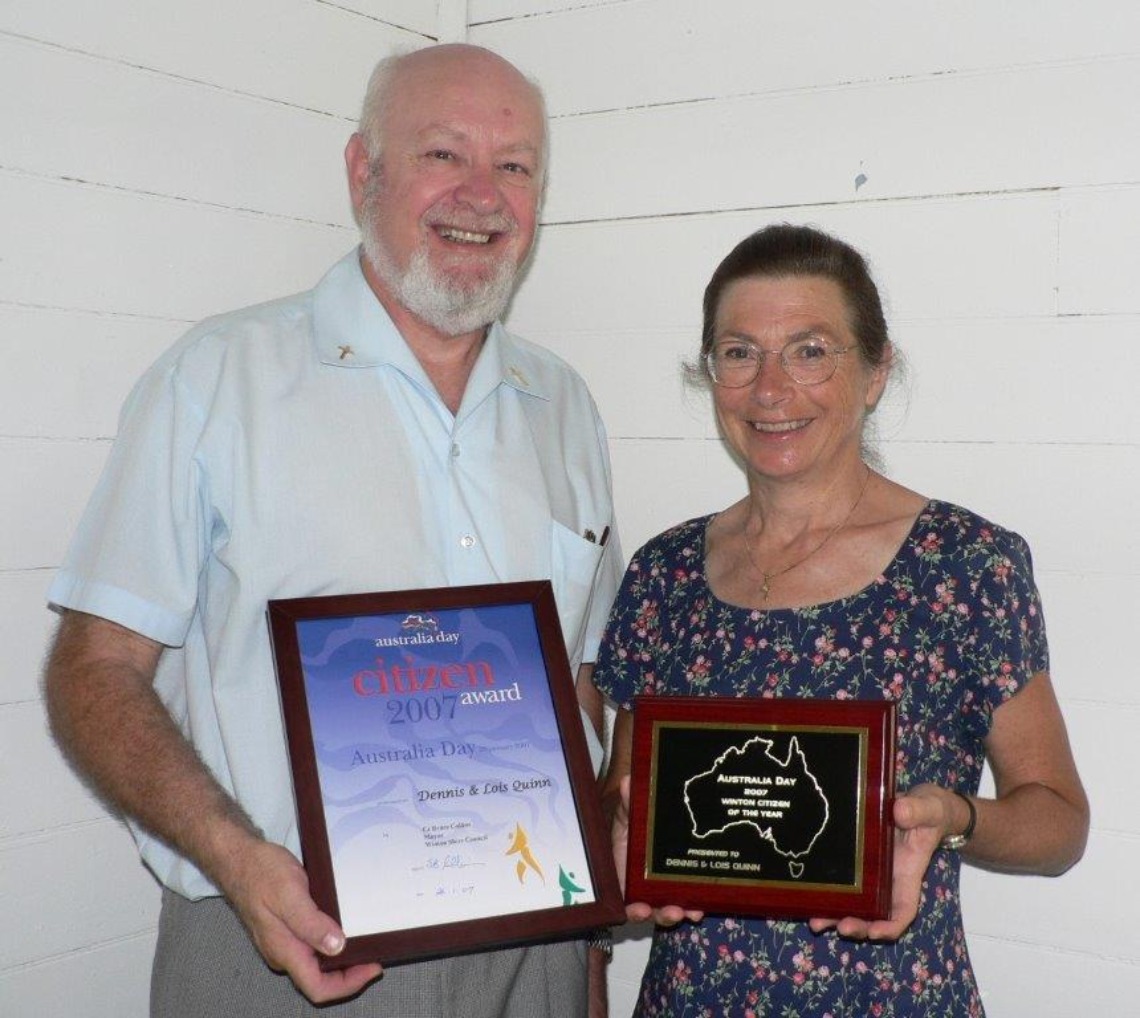 After nearly 10 years as Honorary Tasmanian Regional Officer, Dennis Quinn retired from the position at the end of 2019. Here Dennis & Lois recall the time they spent on the Field with Bush Church Aid.

Our first association with BCA was in 1998 when we undertook a three-month locum in Kununurra and on our arrival we discovered many encouraging letters from BCA supporters.

In 2000 we were approached to consider being appointed Priest-in-Charge in Winton, Queensland. We accepted the invitation and moved to Winton early in February 2001. On the morning of our arrival it was 40°C at 8:30 am and our dog refused to get out of the air-conditioned car. Thus began seven fruitful years of enjoyable ministry with the
people of this dry outback region.

As we look back on this experience our focus is drawn to the people we met and engaged with, both in the church and in everyday life in a small community. There were two main towns – Winton and Boulia along with smaller places that we visited, as well as the pastoral stations in-between. Travel from one to the other was timeconsuming. It was 680 km from Winton to Bedourie and the 365 km trip to Boulia was a monthly commitment on a single width bitumen road that was difficult in the wet as you were likely to get bogged once off the bitumen.

It is the people of the region and the relationships that we developed that brought us much joy and a real sense of God’s blessing in being with them. Early in our time at Winton we discussed joining local groups so as to build our relationships and our knowledge of the area and the people. It wasn’t long before we became members of several groups such as the local Lions Club, the Corfield & Fitzmaurice Association (one of the original hardware shops that had a tourist display) and the local art gallery. It is in these groups that the locals realised we were ordinary people interested in who they were and what they did, and a number joined us in weekly worship at church.

At the art gallery, Dennis was able to use some of his knowledge of lighting to improve the displays and Lois’ organising skills saw her help with changes of material every few months. Dennis also designed the hanging racks for the art and photographic acquisitions that belonged to the gallery.

In August 2001 we were encouraged to participate with the census delivery and collection. Lois walked the town with her bundle of papers and Dennis drove over 2700 kilometres of gravel roads and on one occasion open and shut about 50 gates in one day. He quickly learnt to discuss with the property people the quickest way to find the next station homestead rather than driving back to the road and around the proper way. It was on this initial Census trip that he met a six-year-old who wanted to know – ‘where’s yer hat mate?’ – Mum & Dad were out on the property and he was ‘in charge’. It was very sad only three months later to have him die of encephalitis from a local hidden mud bug. His funeral is one we will never forget.

Our first Christmas in Winton brought a request for us to prepare the towns Carols service under the overriding supervision of the local Lions Club. At every town event up to this time alcohol was sold, but we requested that the bar be shut during the service. This was put to the vote at the Lions Club meeting and it was agreed that there would be no bar operating that night for the first time in many years. The response from the women of the town was very encouraging.

On another occasion, there was a request for a baptism at Corfield which had a local race track, a tennis court, two houses and a pub. A Christmas party for the locals was arranged at the race track and the baptism was to be held there. We ended up baptising nine children ranging from three months to 11 years. Christmas at Middleton (on the halfway point between Winton and Boulia) where a ramshackled pub is the only habitable dwelling, there was another Christmas party on the ‘lawn’ beside the pub. About six mums and some children gathered to sing carols and join in a short service, the men stood on the veranda with their beer and listened. Following this the opal miners had a spit roast and Dennis was asked to bless the meat, but what they wanted was someone to carve the meat for them!

Baptisms, weddings and funerals tended to draw large gatherings as did special services. For the celebration of the centenary of Federation, we had a joint service at the Catholic Church which we filled (it was newer and had air-conditioning). When a service was arranged on a station property people would come from the surrounding area and make it a full day of sharing together and on most occasions between 50 to 100 would participate. One time a wedding was organised for a couple at the bride’s parents’ station about 120 km from Winton. However, a week prior to the wedding day there was a severe storm which caused 13 creeks to flood between the road and the property. The parents organised a truck to collect the guests from near the road for the drive to the homestead. It was a very lavish affair with an outdoor service where the bride was led by a pet lamb and the reception was held in the shearing shed.

Being involved in community groups and events led to a variety of experiences from leading a memorial service on the anniversary of a serious plane crash to participating in the placement of a new cenotaph at Boulia. We also participated in the first concert of the Queensland Music program held on the site of the original homestead in the local national park.

Some interesting observations: what do you do with 23,000 litres of molasses or 240,000 bales of hay sent for drought relief? I’ve also learned how to drive a large forklift and a truck with trailers, run sheepdog trials, guide tourist buses and have shared the gospel at the pub!
Life in God’s service is never boring in the outback!

Everyone who has left houses or brothers
or sisters or father or mother or wife or children or fields
for my sake will receive a hundred times as much
and will inherit eternal life
Matthew 19:29