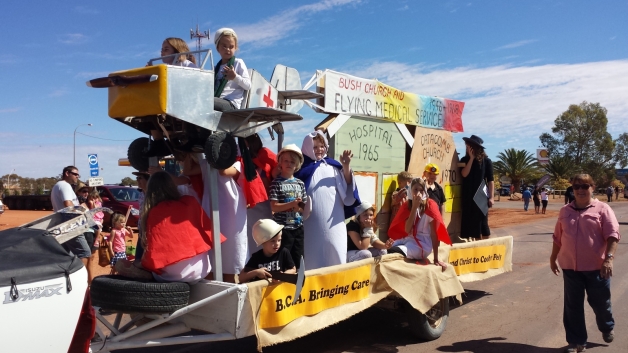 The 2015 Easter weekend 2015 saw Coober Pedy celebrating 100 years since the discovery of opal.

The town organised a huge weekend of festival events. The local Catacomb Church, headed by BCA’s Geoff and Tracey Piggott and members of the church, along with a mission team from the Camden Haven Anglican Parish (Laurieton NSW) were at the forefront of events.  The church had a float in the street parade (featuring BCA’s past and present involvement in Coober Pedy), craft activities for the children in the festival and organised a Combined Easter Sunrise service at the Big Winch and a Combined Easter Sunday Thanksgiving Service on the School Oval with a former BCA Missioner Kerry Medway speaking on Willie’s Discovery. As well as these, Geoff and Tracey opened their underground home and the Catacomb Church for visitors to tour and discover some of the stories of BCA’s commitment to Coober Pedy for over 69 years.

BCA’s first touch with the frontier opal mining community was in 1946, when the BCA Flying Medical Service flew in for evacuations and medical clinics. In the 1960s two BCA Nurses came and a Medical Centre was established. Sisters Heather Heaver and Pat Darby were the first nurses and they had to be tactful in recording medical records with many miners living in Coober Pedy under assumed names. One BCA nursing sister won a medal for bravery; Sister Anne Dau went down a mine shaft to examine a miner who had fallen over 50 metres. She was awarded a Certificate of Merit from the Royal Humane Society for her bravery and compassion. The Medical Centre became a centre of local care and assistance with BCA Sisters Carol Allen and Michelle Blundell assisted by local community nurse Sister Vicki McCormack (a member of the Catacomb Church along with her mining husband, Albert). The Sisters were granted a special licence to take X-rays and were often called upon to act as vets and treat wounded pets (outside at the back of the hospital). The Sisters also taught Sunday School and reached hundreds of children for Christ.

One of the highlights of BCA’s history in Coober Pedy, was the opening of the Catacomb Church in 1977. Members of the church had worked for several years digging, and gouging out the church complex from the ground and leaving their blood, sweat and tears in the walls and foundations. What a joyful occasion the opening was for locals and visitors!

Today, The Revd Geoff and Tracey Piggott are still waving the BCA flag in Coober Pedy. They are greatly appreciated by the locals and are seeking to win many lost opal miners and their families and tourists for Christ.